Further to our recent post on the Google Local Stack, we're getting regular calls from business owners about problems with their Google My Business local map listings.

It's vital for your Local SEO that you get your map listing - and all the data that feeds into it - correct.

It is getting easier to rectify these issues but you still have to know what you are doing. And your back story across the internet needs to confirm the changes that you want to make.

Mandy from Verve Fitted Bedrooms in Rettendon, near Chelmsford, came to us with almost all of those problems spread across the FIVE duplicate listings that existed for her business. She was aware of three of them but we managed to find her a couple more!

Her most pressing issue was that she had four reviews and these had been split between two listings which showed the correct Name, Address and Phone Number but only one had the map marker in the right place. The second had positioned her on Main Road in South Woodham Ferrers rather than Main Road in Rettendon.

She wanted the second, incorrect listing to disappear but she didn't want to lose her reviews.

And she wanted all the other duplicates to go away as well.

It took a couple of hours to establish the exact nature of the problem and then a couple hours more to rectify it, including some phone calls with Google Help at midnight and some editing of Google Maps and Google MapMaker but, eventually, we were able to achieve her desired result.

Here's what Mandy had to say:

If you're struggling with your Google Maps/Plus/My Business listing, give us a call.

We charge £168+VAT to investigate and find out the cause of your problem and £84+VAT/hour for the time it takes to resolve your issue.

Click below to get in touch - tell us your problem and we will get back to you. 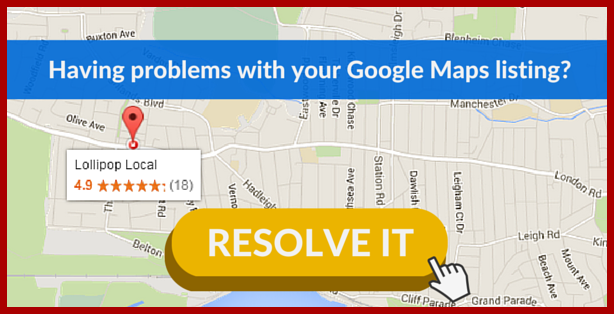 Lollipop loves Social Media. Our blog shows you how to promote your business and convert your website visitors into leads and paying customers. Take a look!

Google Plus Training For Beginners

Lollipop help ambitious Fire & Security MDs who realise word of mouth is not enough in the 21st century. Our proven process (Websites with TLC) brings in additional leads, site surveys and customers. So you become the Fire & security company everyone wants to work with.

Questions? Drop us a line...